Time to add more specific validations to the responses JMeter gets

Making educated guesses based on unreliable data provided by people who don’t know what they want.

These tools allow us to evaluate the responses’ contents and the time they took to reach us back.

However, unless the server give us some response different than 200 OK, we will never see a failure.

In situations of heavy load, all sort of problems can happen on the server:

Additionally, we may want to investigate how the server reacts in situations different from 200 OK:

To answer such questions, it is necessary to run additional validations to each request.

In JMeter, these validations are called Assertions.

Let’s take a look at some of the simplest, but useful JMeter Assertions.

For this post, we will focus on Response Assertion, Duration Assertion, and JSON Assertion.

The Response Assertion performs content validations on the response, both on the data and meta-data.

Its goal is to detect bad responses generated during heavy server load and stress.

In the example below, we have defined a response validation for all Thread Groups (note the definition on the same level as the Thread Groups).

This Assertion will act (Apply to) to the first response (Main sample) and re-directs (sub-sample), if any.

The validation itself checks if the Response Code Equals to 200

We can create as many All-Thread-Groups level Assertions as we want.

Below, we are checking if the Response Message Equals to OK.

When we run again, all responses continue to be green, because they fullfil both criteria. 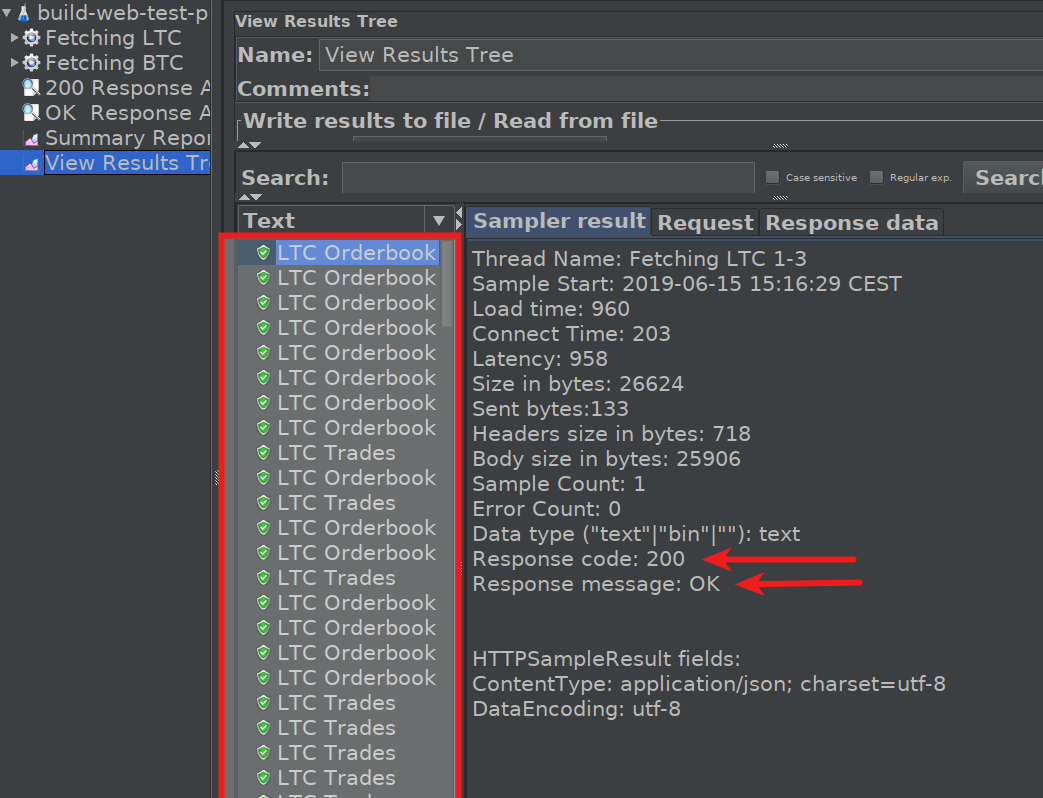 Now we see the exact Assertion that failed and the diff between what was expected (comparison) and what we got (received).

Since this assertion is request specific, it only makes sense to have it under a Thread Group:

In case any request fails to meet this limit, JMeter will show a friendly error message:

JSON is an extension of the Response Assertion. It aims to facilitate the navigation in JSON responses, in order to do simply integrity verifications of the data.

In the Assert JSON Path exists, we set a JSON path and JMeter will throw an error if this does not exist.

Additionally, we added a regular expression to match the element found on the path. In our case, I want to be sure we are talking about a decimal value (at least on numeric value, optionally followed by a dot ., followed by zero or more numeric values).

To demonstrate a failure, I’ve marked the “Invert assertion”, we raises a failure if the regex matches.

With these three assertions, you can investigate further the responses you get with JMeter.

You can see all posts of this JMeter series here.

And if you want to try out the resulting suite, you can download it here.

How would you implement the questions we asked at the beginning of this post?

You may also enjoy

Coding Katas for Automation in Web Testing - Exercise 1 of 3

Practice makes it perfect. Time to apply the old saying to improve our skills in automation for testing website interfaces.

That’s A Bug is back! Here let’s talk about one important thing I learned last year and what we will see in 2021.

Five links on new IntelliJ features, how the beginner may master the master, the true power of automation in testing, patterns of branching, and how Integrat...

Five links on automation tips, hiring in IT, contract testing with Javascript, software engineering state in 2020, and testing teams after COVID-19.